I knew very little about Jojo Mayer before this event; a friend bought tickets # 1 and 2 (and won some raffle prizes for his trouble) and gave me first refusal on one. Nice chap. Good friend. I’d seen some Youtube clips and watched in awe at skills I could never hope to begin to consider approaching, and a highly intelligent master telling the audience about his experiences, techniques and approach.

The introduction by the organisers, X-Music and Mike Dolbear, was suitably low key but somehow everyone in the cheap seats knew this was going to be something special.

Jojo started off by playing along to three MacBook-based backing tracks in the Drum’n’Bass genre, not a species I know very well. But now I want to know more. As a decrepit prog rock devotee, I warmed to the technical way he could allow the backing track to pulse in the background while he went on a wild ride on a parallel sidetrack but always met back with the train with unerring precision. And he made it sound and feel good. His inner clock is nothing short of phenomenal.

This wasn’t a gig though, so he then turned on the mic and allowed our fellow punters to lob questions at him. Having expounded on such topics as his approach to composition (namely his “Neurotic” and “Schizophrenic” methods), polymetric playing and it’s mathematical underpinnings, the importance of having musical integrity (my words) and not doing it for Facebook Likes, and the zombie that is the global music industry, he spoke in some detail – and from a position of authority – on his bass drum technique and the reasons he designed his own pedal.

Long story short, he has a collection of over 40 pedals, one dating back to 1909. I had no idea kick pedals were around 104 years ago. I’ll bet you didn’t neither. He explained that drumming has about 400 years of history behind it, much of it from the military, whereas the bass drum (as played by kit players) has a much shorter legacy dating back to somewhere in the 1940s. The original pedals were constructed with leather or nylon straps joining the footplate to the rotating cam. This worked well for the music styles of the day, namely Jazz, Bebop, Big Band and such, because much of this was played quietly and with a regular pulse.

One individual, Albert “Al” Duffy, who ultimately invented the original Camco chain drive pedal from a modified 5000 was struggling with the recurring problem of wearing and breaking straps. He got the idea from a timpani tuning drive for a chain mechanism to replace the fragile straps. This eliminated the wear and tear and it still worked for the musical styles in vogue.

Then, along comes rock’n’roll. With it, a revolution in electrically powered amplification equipment. With that, the need to play LOUDER and faster. So, the full body powered kick stroke became the norm, as did laying the beater into the head. The problem with that, as Jojo pointed out, was that the chains were now in common use (because manufacturers recognised that “it’s what the kids want”). But the chain doesn’t add anything, just weight and inertia. 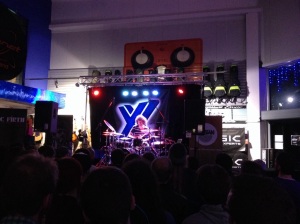 He investigated literally EVERY kick pedal manufacturer in the world and found out an interesting thing: many of them are produced by the same manufacturers in a factory in China and rebadged. There has been no real innovation in this area for many years. This led to further studies of technique and an attempt to get to the bottom of exactly WHY he could not attain the foot speeds he thought should be possible.

That approach led him to adopt a strategy: mimic his hand/arm techniques (which were working) with his legs/feet. This is where I could go into some wordy detail to try to explain how Jojo described the mechanics of this, but I’ll necessarily gloss over these details because I couldn’t possibly explain it here.

Another part of the problem related to friction between the sole and the mechanism’s footplate. Generally regarded as desirable by contemporary players, it was one of the main reasons Jojo couldn’t realise his developing technique.  He took to cannibalising many of the items in his collection, to create the Frankenstein pedal (his words). And yes, I know it wasn’t the monster’s name.

Once Jojo had the problems, and the solutions, diagnosed, he took to designing his own pedal. The result was the Perfect Balance pedal that bears his name as a prefix. It’s a simple looking construction but it has some slick features: a smooth footplate to enable the foot to slide (he showed us the leather soles glued to his trainers to complete the friction-free ensemble); a single post to remove a physical barrier to foot slides; a slick folding mechanism for teardown in a couple of seconds; and a quick clamp mechanism for swift attachment to the drum. All in all, a nice bit of kit.

The biggest problem I had, though, was a personal one. He forced me to rethink all I knew, or thought, about kick pedals. I got a DW 9002 a few months back for a real bargain, and it’s lovely, it’s smooth, solid and the nicest I’ve played with (from a small stable of choices) but now I just don’t know any more.

Enough about my petty woes.

Throughout the evening he was happy to demonstrate, not just explain, what he meant with many examples on the kit. It was all, somehow, accessible. Despite the hopelessness one feels when the reality hits that you’ll never attain such heights. He rounded off the night with another couple of tunes.

I discovered another thing on the night also – I want another snare drum in my setup with one of his Hoop Crasher things, developed with the help of Sabian.

It’s clear that Jojo has a quirky, unique and intelligent approach to what he does. He certainly can talk about it too, with the Swiss accent, the gesticulations and the spectacular hair. But his zeal and charisma are in full view. He can carry an audience with both his narrative AND his playing. And his technical knowledge, proficiency and (a word favoured by drumming pundits) chops are first rate. All that, and it sounds AND feels good too.

We were all lucky to be treated to a wonderful 90-odd minutes of entertainment by this rare individual. Let’s hope the success of this clinic will translate to more such events – Mike (Dolbear) made the point that the likes of X-Music took a risk by staging this event. I’m delighted it paid off for them and hope we’ll all reap the benefits in future by having a greater range of them. And that such retail operations thrive through these hard times by taking this kind of risk. I guess it’s something we all take for granted and it’s a good thing that it is pointed out to us. Get thee down to these events!

The man of the evening then gracefully handed out autographs as we left.

It’s not big or clever

Sometimes serious, sometimes not. Work it out.